I love a good ‘people story’. The movie we watched last night, Woman in Gold, turned out to be an especially inspiring and poignant drama based on the true story of Maria Altmann, an elderly Jewish refugee living in Cheviot Hills, Los Angeles, who, together with her young lawyer, Randy Schoenberg, fought the government of Austria for almost a decade to reclaim Gustav Klimt’s iconic painting of her aunt, Portrait of Adele Bloch-Bauer I, which was stolen from her relatives by the Nazis in Vienna just prior to World War II. Altmann took her legal battle all the way to the Supreme Court of the United States, which ruled on the case Republic of Austria v. Altmann (2004).

My critique: Helen Mirren stars in the film and shines as always; the supporting cast wasn’t entirely stellar and the movie was a bit slow to unfold, but all-in-all it was worth my time, and would make an excellent addition to your homeschool curriculum as it’s a perfect springboard/addition to a unit study on World War II, the Nazis, etc. I’m inspired to know more about this feisty gal and her determined young lawyer who refused to quit. 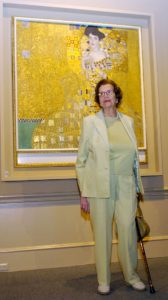 Click on the photo of the real-life Maria Altmann to get a peek into the true story behind the film, Woman in Gold.